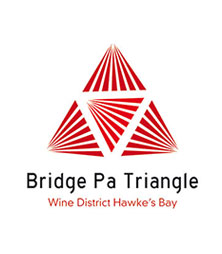 The Bridge Pa Triangle Wine District in Hawke’s Bay has recently been launched to celebrate and promote one of New Zealand’s premium wine-growing sub-regions.  The area extends over more than 2,000 hectares on the western side of the Heretaunga plains and includes the largest concentration of quality vineyards in Hawke’s Bay.  It now has 10 winery members, including Sileni Estates, as well as seven individual vineyard members.

The Bridge Pa Triangle is located on the old riverbed of the Ngaruroro River, which up until 10,000 years ago flowed out to sea between Maraekakaho and Roys Hill.  The river deposited vast amounts of greywacke gravel known locally as red metal, which is covered in different areas by alluvium derived from loess, volcanic ash and greywacke.
The resulting soil is ideal for vineyards as it is well drained but has sufficient water-holding capacity to establish a full grapevine canopy with only limited irrigation.

The average Growing Degree Days (GDD) over the last two decades in the centre of the Bridge Pa Triangle is over 1480.  This is the same as the Medoc in Bordeaux and Coonawarra in South Australia.  Annual rainfall at 720mm is less than Bordeaux but a little more than Coonawarra.  By international standards this area is ideally suited to the production of quality wines and is home to many of the region’s well known wineries.

Some of the Sileni wines sourced solely from this sub-region include Cellar Selection Merlot, The Circle Semillon, Late Harvest Semillon, The Priestess Pinot Gris, The Cape Sauvignon Blanc, The Peak Syrah, The Triangle Merlot, The Pacemaker Cabernet Franc and The Plains Merlot/Franc, a number of which have won Gold medals and trophies.  They are a reflection of the superb growing conditions here.